Our main scenario for the development of the US market is a moderate recession in the second quarter of 2023
Something reminiscent of the recession of the period 2000-2001, only slightly stronger in scale. Despite the fact that in the United States we have already seen two consecutive quarters of falling GDP in a row, a full-fledged recession is not enough for an increase in unemployment and a drop in company profits. We expect to see something similar in the US sometime around the 2nd quarter of 2023.

This scenario currently does not meet the expectations of the market, which expects a slowdown in growth rates, but not a fall. If you look at the estimates we listed above, the consensus assumes that the company's profits will grow by an average of 5% in 2023. Also, analysts of large investment houses expect a slowdown in GDP growth in the US, but not its fall. As for the treasury bond market, the spread between 5-year and 30-year bonds is growing, so the market is clearly not predicting a recession, but is waiting for a slight decrease in GDP growth.

In this scenario, which we assess as the main one, inflation in the US in 2023 will indeed drop to 4-5%, which the market expects, but maybe even more. As history shows, a recession is the best cure for inflation. As for the Fed, we expect the rate to peak at 5-5.25%, but closer to the third quarter of 2023, the Fed will face a serious recession, against which the regulator will cut rates quickly. Faster than the market expects now, up to 3-4%.
What does this scenario mean for different asset classes?

As we have seen from a historical perspective, for equities, the Fed's reversal in monetary policy does not necessarily mean growth. In the cycles that we have discussed above, the Fed's reversal occurred against the backdrop of the start of a recession. The bottom of the market, in turn, in 1980 was reached a year after the start of the recession, in 1990 - three months later, 2001 - a year and a half after the start of the recession. And all of this fall was accompanied by a Fed rate cut.

Given our expectations of a recession in the second and third quarters of 2023, the immediate outlook for the US stock market is vague to say the least. We do not expect stock indices to rise and are leaning towards US stocks being under pressure in 2023 due to falling profits and margins. This will be especially noticeable in the second half of 2023.
If we draw an analogy with previous recessions, shares will be able to move to growth only in 2024.
However, it is worth noting here that the market is now reacting more to the rate, as there are more technology companies and growth stories in the composition of the indices than before, so the reaction may be even stronger, and the effect of the Fed's rhetoric reversal will appear much faster.

The effect of declining market multiples that hit equities hard in 2022 may also still be in play. Although most of the reduction in multiples, in our opinion, is already in price.

Eurobonds and gold look best in such a scenario. The real reversal of the Fed's rhetoric is the main reason for the growth of these assets in 2023. But before this reversal happens, these asset classes can also trade neutral or even in the red. A reversal of rhetoric, namely the gradual formation of expectations that the Fed will start easing policy, as we have already written more than once, may occur against the backdrop of a starting recession (a slowdown in the labor market, rising unemployment, falling consumer demand). However, in our base case, these assets will be the main beneficiaries of next year's growth.
And with investments in the US stock market now it is worth delaying.
As the example of the three recessions most similar to the current situation - 1982, 1991 and 2000 - shows, the stock market reaches the bottom only a year and a half after the start of the recession. Until then, the investor only bears increased risks in stocks compared to bonds, with comparable dividend and coupon yields.

Given the high uncertainty that could be in the US economy next year, it is best to invest in bonds through ETFs - to get high diversification and protection against the risk of defaults of individual issuers. Of the available and liquid instruments for investing in bonds through ETFs, we highlight the following:
A selection of papers from this article is already available in the "market". Watch on the mobile app! 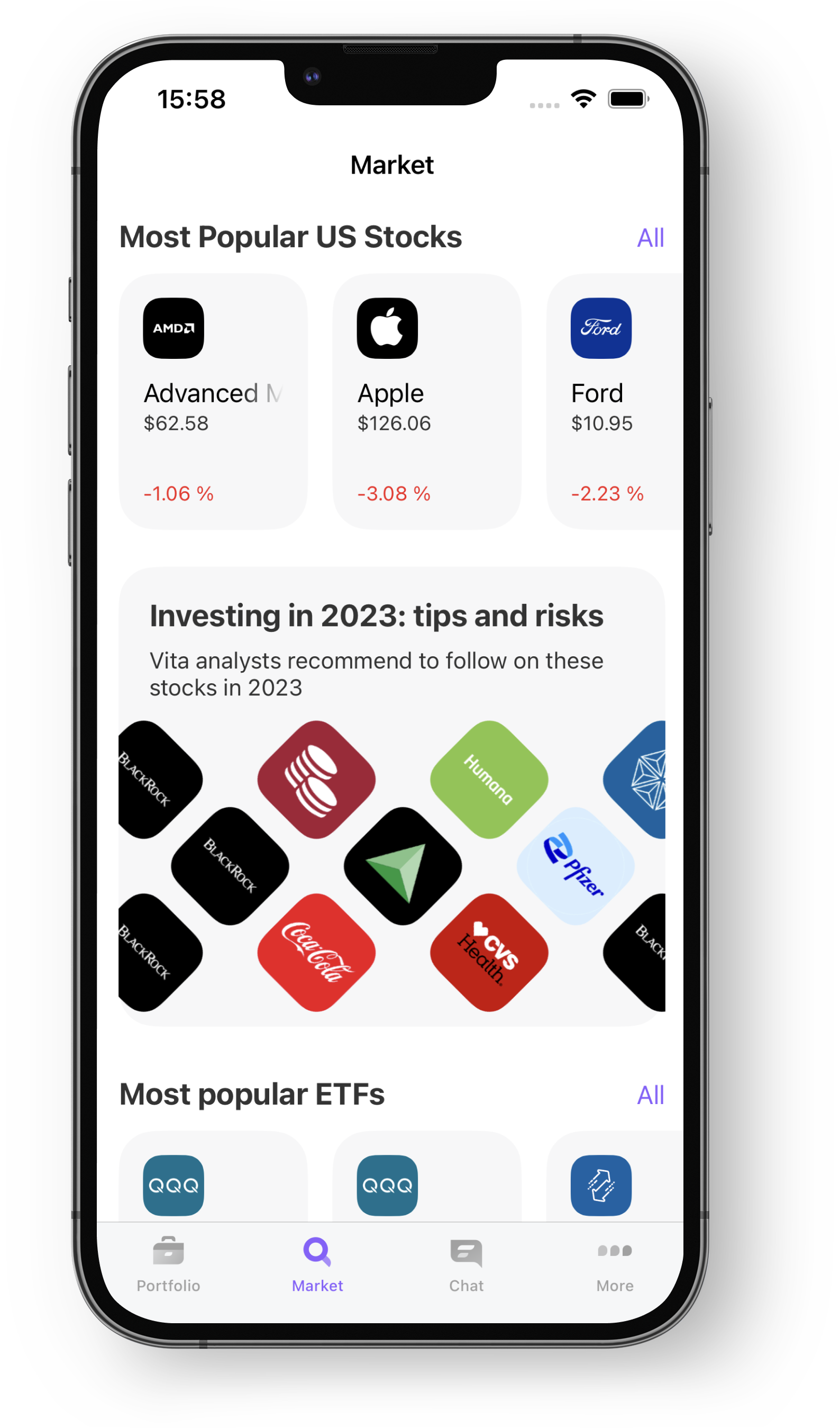 LQD ETF. This fund seeks to track the performance of the US corporate bond index with an investment grade rating. The fund consists of 100% bonds of US companies and banks. The duration of the fund is about 8.7 years. The fund is more conservative than TLT in terms of duration, but has significantly more credit risk, although all issuers in the fund have an investment grade rating. Fund commission - 0.14%. The fund pays monthly dividends - the current yield is about 3.1% per annum. In 2019, the fund grew by 17.1%, in 2020 by 11.1%. Against the backdrop of a recession, we may see downgrading of corporate ratings, which makes this fund less attractive than the previous two.

The VCSH is an ETF that tracks a market-weighted index of investment grade fixed rate corporate bonds with maturities ranging from 1 to 5 years.
This fund is sensitive to changes in interest rates. An ETF is suitable for those who are willing to bear the additional risk of interest rate changes in search of higher returns. VCSH takes a small annual fee for holding and trading on the exchange.
Stocks
History shows that the stocks of the sectors survive the recession phase better:

Stocks are the worst:

Among the stocks with growth potential in 2023, we highlight: Coca-Cola, Mondelez International, Darling Ingredients, Humana, CVS Health, Pfizer, Bristol-Myers Squibb
Gold
Against the backdrop of declining US Treasury yields, there is also upside potential in gold, which is always the beneficiary of the Fed's easing of rhetoric.